Welcome to the latest edition of ‘In the Pen’, our series of interviews with the runners that inspire the Lonely Goat community. This time, it’s the turn of extreme adventurer, Sean Conway.

In 2015, Sean ran from Land’s End to John O’Groats in 44 days. He had previously swam the length of Britain in 2013, and cycled it in 2008, making him the first and only man to have completed this route by swimming, cycling and running.

He followed this up in 2016 with a self-supported, 4,000+ mile continuous ultra triathlon circumnavigating the entire coastline of Great Britain.

Sean holds the record for cycling across Europe, having completed the 4,000 mile route in 24 days, 18 hours and 39 minutes. In 2012, he cycled around the world, despite cycling 12,000 of the 16,000 miles with a fractured spine, after being hit by someone driving a car in the USA.

Born in Zimbabwe, Sean grew up climbing trees and chasing elephants out of the garden, before moving to the UK in 2002. 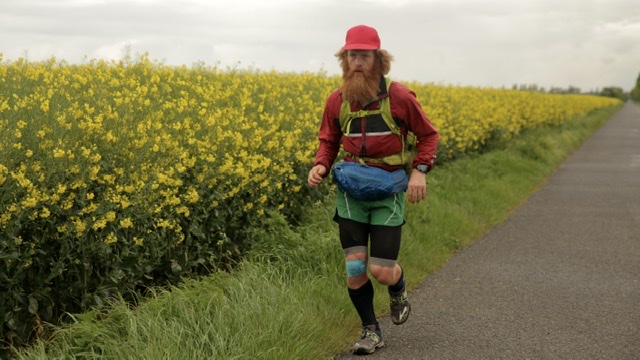 Sean kindly took time out from planning his next adventure to answer our questions.

Truthfully, I mainly run when I have a running goal, ambition or project on the go.

I would normally always choose cycling over running, to be honest, for the last four or five years. But actually, recently, I’ve now started to run more because I find it just so much quicker and easier.

I’ve got a young family and it’s quicker to throw the trainers on and go for a quick run, rather than the rigmarole of going for a bike ride. I feel I can get a lot more out of a two hour run, for example, than I would from a two hour bike ride from a fitness point of view.

Records motivate me, to be honest. I really struggle to do regular, ‘proper running’ – like big runs, 50K and stuff like that – unless I’ve got a project to work towards.

The things that motivate me are just trying to break records – whether they be swimming, cycling, running or triathlons. That’s the thing that gets me out of bed – that big scary goal, that thing that terrifies you every time you wake up. I know that if I don’t go for a run then I’m not going to be able to achieve that big scary goal.

3. What are your top tips for beginner runners?

My main bit of advice is just don’t overthink it. Just go out and start small.

So my biggest tip for beginners is to start small and enjoy it. Run for fun. Go slowly. Stop in cafés. Stop in the pub. Don’t take it too seriously. Make it enjoyable, because if you do that, you’re more likely to stick at it and you’ll naturally just get a bit fitter.

4. What is your favourite place to run?

There’s so many places!

I think if I had to pick an A to B run that I’ve done, that I really loved, it would probably be the West Highland Way, from Fort William down to Glasgow (though most people actually go up from Glasgow to Fort William). It is probably the run I have the fondest memories of.

It’s just shy of 100 miles and you can do it pretty much self-supported. I did it just with a little rucksack. There’s enough little hostels or campgrounds to stay at if you book in advance.

Scotland’s great, because you can wild-camp, so I had a little, lightweight tent. It was great to just be able to camp up anywhere. There’s food pretty much anywhere, so you don’t have to carry tons of food or cooking equipment if you don’t want to.

5. Where would you like to run that you haven’t?

I would love to run across Mongolia – I think that would be a pretty awesome run.

I’d use a buggy or a cart – preferably a buggy, but I might end up needing a cart as I think I’d have to carry a lot.

6. Do you have any funny running stories?

I think the funniest one I have is from when I was running the length of Britain.

I was running Britain, but stupidly, completely forgot to go through Wales – which is of course part of Britain and where I live now.

I was coming into Cheltenham, around Worcester, and a friend of mine called Matt Pritchard – who used to be in ‘Dirty Sanchez’ on TV – said “Boyo, how can you be running Britain and not coming to Wales?”

I said “Oh my goodness, you’re absolutely right”, but the problem was, I had to be in Bristol the following day. This meant I would have to do an epic detour over the Severn Bridge, just to have a pint with Matt.

So I ran 40 miles, with a 7kg rucksack, into Wales and got there at 11 o’clock at night. Matt was waiting on the bridge for me, and we said “Oh well, let’s just go to the pub and have one pint. We can probably camp in the pub garden – I’m sure they’ll let us – and then we can be off in the morning.”

We got there, just before 11 pm, but Matt Pritchard is a pretty big celebrity in Wales, so as soon as we walked in, the pub landlord said “It’s Matt Pritchard! Right boyo, we’re having a lock in!”

We said, “That’s cool, don’t worry, do you mind if we sleep in your garden?”

He said “Ah, you know what? Don’t worry, you can sleep on the pub floor. And here’s a piece of paper; just write down everything you drink and sort me out in the morning.”

It was carnage. I think we eventually went to sleep at about 5:30 am as the sun was coming up and had about 3 hours sleep. At about 8:30, Pritchard said “Right boyo, let’s go” and put a double Southern Comfort in front of me.

And then we left – me, him and his dog – and ran a marathon all the way into Bristol. That was tough.

Never run 40 miles to have a pint with Pritchard, because it’s going to end badly! 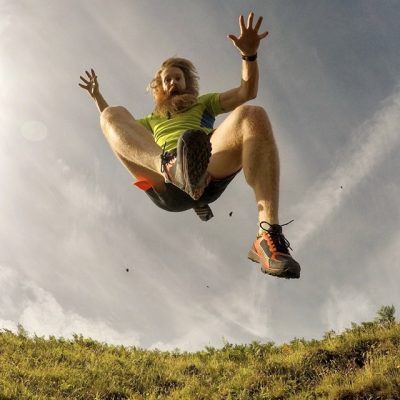 7. Do you have any favourite running books?

Jamie McDonald’s book, Adventureman, when he ran across Canada, is pretty good. Anna McNuff’s, The Pants of Perspective, when she ran the length of New Zealand, is also pretty good.

Running Man, by Charlie Engle, is a memoir of his crazy story and is not all about running.

Born to Run, by Christopher McDougall, is a phenomenal book, but that’s kind of an obvious one to choose.

And there’s my book, Running Britain: Let’s go with that one!

There’s so many things.

I used to always run with a watch and a HRM and I got so obsessed with the numbers it started to take the enjoyment out of it. Now, I don’t run with everything.

In fact, if it’s less than a two hour run, I don’t even take water, or food, or anything. I’ll fill my belly up with a big breakfast before I leave and I’ll just run.

I don’t take a watch or HRM. I’ll take my phone for maps if I’m using the trails, and then go.

I’ve become more in tune with how I feel, rather than just the numbers and sometimes getting depressed about them.

9. What result are you most proud of?

Running the London Marathon for the Scouts in a big Scout badge.

It was so awkward because I had to run like you’d run if you were carrying a plate of drinks, to stop it bouncing it up and down. It was bouncing off my shoulders because the harness wasn’t great, so I had to hold it. There were handles inside the badge and I had to lift it up for the whole marathon.

I had to wait for the runners dressed as rhinos. When they come through, everyone calls out “Hey, Rhino Chris”, or “Rhino Emma”, and everyone moves out of the way for them. If I found a rhino I could slipstream behind them for a bit and gain a few places.

It was super awkward and I ended up being out on the road for four and a half hours, carrying this Scout badge.

I was pretty happy to have finished that one! 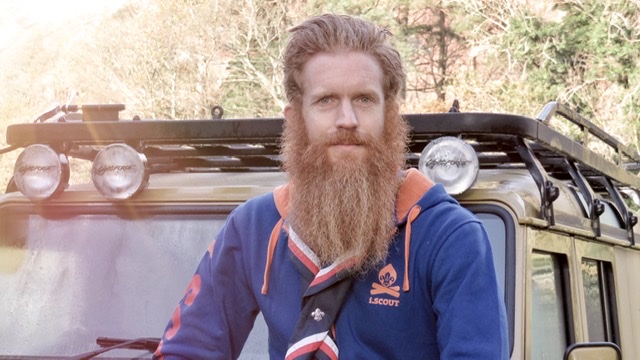 I’m inspired by loads of people that go out and do silly things.

When I was a kid though, my Mum always used to call me her ‘Zola Budd’, because Zola Budd famously ran without any shoes and I would always run around the bush with no shoes on. She was my first inspiration in the world of running and inspires me a lot.

No, I’ve never done a parkrun.

In fact, the only running event I’ve partaken in is the London Marathon – true story – unless you count a Tough Mudder.

This surprises people as they think I run all the time. I do run all the time, but I prefer to run on my own. I’m not really into big crowds of people, and that sort of thing, so I like just running by myself.

12. Music or silence when running?

Neither. I love audiobooks, so I predominantly listen to audiobooks or podcasts, depending on what I’ve got in my phone.

It’s great; I find I’m a sucker for information – a sponge for learning – so I enjoy just listening to audiobooks – mainly non fiction – and podcasts. 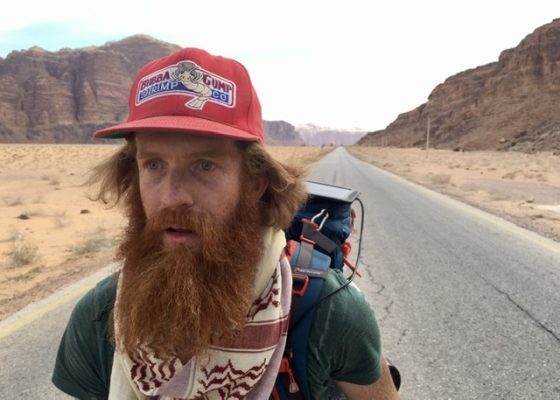 13. What do you like about running on your own?

For me, it’s a form of meditation.

I get asked a lot whether I meditate and the answer is “No, I struggle to sit down in one place and meditate”.

I’ve tried everything: I’ve went to Japan and saw a meditation guru in a temple, and I still couldn’t do it. It’s not really my thing.

Whereas I find exercise, for me, is a great, great way of meditating.

I come up with ideas when I’m on my own and think of loads of stuff to do. I’m very proactive when I run alone.

When I run with other people I find I’m just caught up in chit-chat – and sometimes that’s nice – but I like to use running as a form of meditation.

14. What is your next challenge?

Well, it is very top secret.

I was due to leave in July to do it, but of course I’ve had to move it. So watch this space.

Hopefully October is when we’re going to push it to. It’s going to be a good one. It is running related, actually.

seanconway.com is pretty much it.

Keep an eye out for the next In the Pen interview, coming soon…