‘In the Pen’ is our series of interviews with runners who inspire the Lonely Goat Running Club community. We’ve spoken with elite athletes, authors, podcasters, CEOs, coaches, and adventurers. For this edition, we hear from a runner it is unlikely you will have heard of – Steven Oltay.

Despite not being a household name, Steven’s story is well worth sharing…

We were introduced to Steven through The Running Charity – an amazing organisation who provide ‘youthwork on the move’ through wellbeing programmes in London, Manchester and Leeds.

They deliver high-quality welfare and youthwork support to young people aged 16-25 who are affected by homelessness and experiencing multiple complex needs. They help young people who have had difficult pasts to get back on their feet, using a goal setting and reward system to develop the habit of achieving.

When Steven joined The Running Charity in 2014, he weighed just seven stone, was substance dependent, and regularly rough sleeping. He now works as one of their programme coaches, helping other young people to turn their lives around. 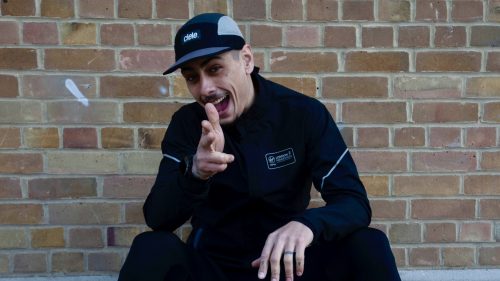 Why do you run?

Being active is the polar opposite to the way I used to live before meeting The Running Charity and being introduced to running. I spent months sleeping rough, I never did any sports nor was I fit. I smoked, drank alcohol and was in poor physical condition – I couldn’t even run a lap of my local park.

Once introduced, I instantly fell in love with the constant effort involved in running. The strain on my heart and lungs makes me feel alive and connected to my body and breath. A day without running isn’t a good day.

Running also deflates my ego, which has a tendency to swamp me if left unchecked. A daily battle with myself on the road shrinks it down to size.

The thought of who I used to be, and the sedentary and inactive lifestyle I used to live is all I need to think about for motivation. I don’t like the person I used to be and running is an excellent way to bury that version of myself.

I love the thought of not needing more than a pair of shoes to make something happen, chipping away at whatever is bothering me, whatever needs extra thought, or even just getting some air.

Pushing my limits is another big motivator, the thought that I’m capable of so much more than what I did yesterday. Stories of ultrarunners or feats of endurance in any sport really get me going.

What are your top tips for beginner runners?

Keep your easy days easy and get plenty of rest. There is loads of time to become fitter and run longer, but not if you get injured. Particularly, if you get injured early on, you are likely to quit and hang up the shoes.

Getting connected to a running group helps with the motivation. So will recording your runs and signing up to parkrun.

Goal setting is everything with running as the power in smashing your goals can quickly boost your confidence and make you a stronger person all round.

These are some of the most important tools I use in my role as a programmes coach with The Running Charity.

What is your favourite place to run?

I love running in places I’ve never been before, exploring a new area or following trails that I’ve just ran past. Getting lost with running is one of my favourite things to do.

Where would you like to run that you haven’t?

I’d love to run in mountain ranges. There isn’t any terrain like that in London though, unfortunately.

Do you have any funny running stories?

I once ran barefoot 10km across London to work. Upon arriving, I realised the skin on the bottom of both my feet had come off and was red and bloody.

I then worked 8 hours on those same feet and vowed to never run barefoot again.

Do you have any favourite running books?

There’s two. My personal favourite would be Ultramarathon Man by Dean Karnazes.

However there’s a book coming out soon with stories from a few of the young people at The Running Charity, and other runners. It’s called Running Stories by Jerry Lockspeiser.

I find it so uplifting to read other people’s journeys with running, when mine has been so important to how my life developed.

What did you used to do that you don’t do now?

I always used to run with music. Now, it’s either a podcast or silence. I get more from being able to hear my breath and being present to whatever’s going on in my head, than by ‘cheating’ and listening to music – music makes the running feel easier.

Going from always listening, to nearly always running in silence, I can definitively say that I get more from my training in silence than I ever did with music.

What result are you most proud of?

I’m most proud of running a 1:26 in The Big Half in 2020. I was never an especially fast runner, but I decided to go after a sub-1:30 and found it easier than expected.

I’ve now set the bar higher and plan to run a sub-1:20 in the coming year. 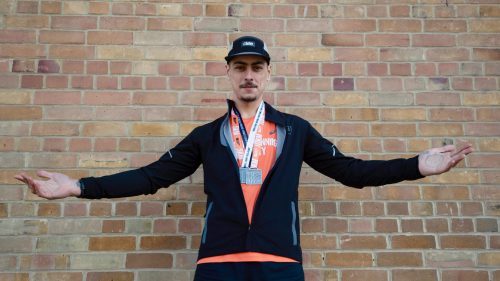 David Goggins is the biggest inspiration for me. His stories of running ultramarathons on little to no training inspire me more than anything.

I believe running through our mental, physical and emotional barriers is one of the most incredible feats any human can do, and if he could do it on no training, then so can I.

My local parkrun is Highbury fields and I was there as often as possible before Covid paused all parkruns.

What do you like about running on your own?

Running alone is my time to process anything that’s been mentally neglected. It’s time to consolidate my thoughts and push myself without any conditions.

What is your next challenge?

I haven’t decided what my next challenge will be. I have my eye on the London to Brighton ultramarathon, but I’ve recently become a dad and not had as much free time to get the long runs in.

I’m not on any social media sites, but you can see the difference that myself and The Running Charity make over on their Twitter (@Running_Charity)and Instagram (@therunningcharity).

Is there anything else you would like to add?

​Running has become the bread and butter of my life. It gives me more than any other sport or activity I do. Its ability to improve my life state has been such a powerful tool to have and utilise over the years that I couldn’t fathom where I’d be without it.

My life before meeting The Running Charity and starting to run was often far too much for me to handle. I was never taught a safe and healthy outlet for stress or a way to process general life stuff. I can’t imagine a life without running and I hope to run one day run that London to Brighton ultra and show how far this body and mind of mine have come.

We hope you enjoyed our chat with Steven Oltay.

Keep your eyes peeled for the next ‘In the Pen‘ interview, coming soon…